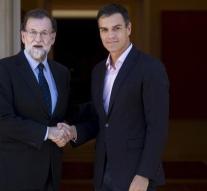 madrid - Pedro Sánchez, the leader of the largest Spanish opposition party, the Socialist PSOE, has expressed its support for the Prime Minister Mariano Rajoy's government about any measures to be taken if Catalonia wants to set apart from Spain.

Sánchez: 'If Catalonia challenges independence on Tuesday, the PSOE is behind the Spanish government's answer, whatever it may be. Everything in order to prevent social cohesion in Catalonia at risk, 'said the leader of the socialists.

Sánchez also said that 'in the Catalan Parliament, Tuesday will not come to a vote on independence. '