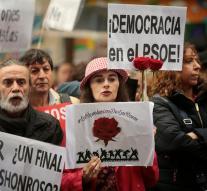 - The Spanish Socialists on Sunday cleared the way for a minority government of the conservative Popular Party PP. This has put an end to the political stalemate of the past ten months. The impotence of the caretaker government to make decisions, economic development stagnated in Spain.

At a congress of the center-left PSOE voted 139 members with parliamentary support for Prime Minister Mariano Rajoy, who is now finally begin his second term. The rest of the voters, 96 in number, still showed no confidence in Rajoy. The change has to do with the departure of party leader Pedro Sánchez, who together with the PP all that time excluded and pushed for new elections. He recently stepped forced to post losses in regional elections.