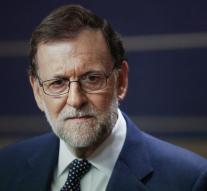 - The outgoing Prime Minister Mariano Rajoy of Spain hopes this week in the Spanish parliament to get the support of at least six members of parliament to form a new cabinet under his leadership. He wants to prevent the country for the third time since December in the polls must.

Rajoy currently has the support of his People's Party (PP), the liberal movement Ciudadanos (Citizens) and a Member of Parliament of the Canary Islands. Together that accounted for 170 of the 350 seats and thus insufficient to govern.

The only party that just maybe a new cabinet Rajoy reluctantly would tolerate, the Spanish Socialist Workers Party (PSOE) by Pedro Sánchez. Sanchez has clearly know nothing feel a new government Rajoy, but the political stalemate that has lasted eight months, Sanchez could vote milder.


Formally Rajoy presents Tuesday (16. 00) in the Spanish Lower House as the new head of government.