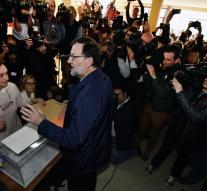 - The ruling conservative People's Party (PP) remains in Spain according to polls after closing the polling stations Sunday, the largest party, but lost the majority in the Spanish parliament.

The PP Prime Minister Mariano Rajoy loses as much as expected socialist PSOE votes to newcomers, especially the liberal Ciudadanos (Citizens) and the left-wing Podemos (We can).