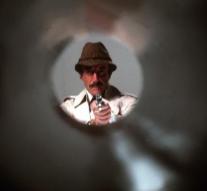 - Spanish police have arrested in Barcelona five suspected members of the so-called 'Pink Panther' jewels gang. A special unit of the Catalan police were waiting for them when the thieves, one of whom was armed with a gun tried to rob a jewelry store on the famous Passeig de Gràcia.

The operation was part of a larger study with different police units in Spain and with the cooperation of Serbian and German police.

The Pink Panther gang got its nickname after a robbery in London in 2003 when one of the thieves had hidden a diamond in a pot of beauty cream, similar to a scene in one of the Pink Panther movies with the awkward French detective, played by the British actor Peter Sellers.


The international police organization Interpol estimates that the Pink Panther network has stolen jewelry to more than 334 million by around 380 armed robberies between 1999 and 2015.