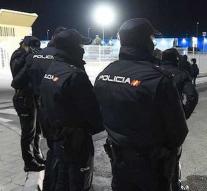 According to a statement by the Spanish police, the suspects are between 14 and 76 years old. It concerns 78 men and one woman.