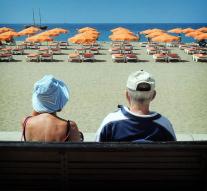 - Nearly thirty thousand Spaniards have received pension in 2014 while they were already in their graves. In total, with pensions that go to the deceased, annually involving an amount of 300 million euros. This remarkable figure was announced by the Spanish Court.

In total there are 29 321 deceased Spaniards who received still retired in 2014, while they were already deceased. Alone, 25 million were paid to them in December 2014. On account of these deceased people ten months later, still paid the same pension in October 2015.

The Spanish Court of Audit is the figure by comparing the benefits of the Spanish Social Insurance with the statistics of the dead, who are registered at the National Institute of Statistics (INE).


The Court calls for a reform of the bureaucratic system full of gaps and weaknesses. In the Court of the Social Insurance is insufficiently informed of deceased persons. There is too little monitoring by both SVB and the banks to whom the pensions are actually paid.

Earlier this month the government Rajoy was known that there had to be claimed for the second time in a reserve fund to pay the Spanish pensions. The strong aging is one of the causes of the shortfall in pensions. Hundreds of thousands of young Spaniards have emigrated since the beginning of the crisis in 2008. In addition, Spain has one of the lowest birth rates in Europe, with an average of 1.3 children per family.