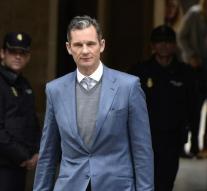 madrid - The public prosecutor in Spain wants a prolonged cell punishment for Iñaki Urdangarin, the brother-in-law of Spanish King Felipe VI. Urdangarin was sentenced to six years and three months in prison in February this year due to tax evasion and laundering. The Spanish newspaper El País reports Monday that the OM has now demanded fourteen years and six months celebration at the Madrid Supreme Court.

Urdangarin has appealed against his condemnation and is awaiting the judgment on free feet. He has to report once a month.

Former handball pro Urdangarin is the husband of Cristina de Borbón, the youngest sister of the king. The Borbon himself was released earlier this year from accomplice to the scandal.