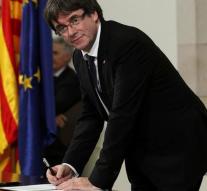 madrid - The speech of Catalan leader Carles Puigdemont Tuesday was, according to the Spanish Foreign Minister, a trick \u0026 # x27; \u0026 # x27; That said Minister Alfonso Dastis through the French radio station Europe 1.

According to Dastis, the speech was 'a trick to say the one and the opposite'. Puigdemont did not call independence on Tuesday in his speech in Barcelona, ​​but asked for a mandate to do so. He said that there should be time for negotiations with Spain.

Wednesday afternoon a reaction is expected from Spanish Prime Minister Mariano Rajoy. Deputy Prime Minister Soraya Sáenz de Santamaría was on Tuesday evening a proposal to negotiate under the guidance of a foreign mediator.