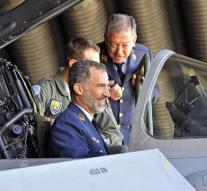 - The Spanish king Felipe does later this month a new attempt to launch talks on a new coalition government in his country. 24 and 25 October, he invited the group chairmen for a consultation.

So far two failed attempts by the ruling Prime Minister Rajoy to bring a group together on behalf of Felipe. Main stumbling block was the refusal of the Sánchez leader of the socialist party PSOE to go into the sea of ​​the PP with the conservatives. Last week, Sánchez came under pressure from his party and became paved the way for new talks.

It is expected that Rajoy again given the task of Felipe to form a government. If this fails needed new elections.