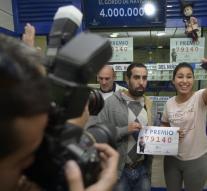 amsterdam - And it continued Tuesday night for a long restless in Roquetas de Mar. The southern Spanish city, with 91,000 inhabitants slightly larger than Oss, was the winner of 'El Gordo', the Spanish Christmas lottery.


A group of 1600 participants may allocate 640 million euros- 400 000 per lot. Consequently, the lion's share of the prize of the lottery, a total of about 2 billion euros, in a hard-hit by the economic crisis region. Around noon it was already big party in the village in the province of Ameria, complete with guitar music and hastily-made T-shirts.
The mayor of the town called the lottery winnings exactly what his church needs. 'These are difficult times', he reacts against a local newspaper. Almeria is 31 percent of the workforce is unemployed. For all of Spain that proportion is ten percentage points lower.
A large part of the prize money goes according to British newspaper The Telegraph to a local school. That was around the lottery launched a campaign to raise money for a school trip.
Another lucky winner is a man who in 2007 as a refugee make the crossing from Africa to Spain. The Senegalese, who will not give his name, thanked with tears in his eyes, 'the Spaniards and the Spanish government that they have saved me from the sea.'
Spain gave this year's 2.6 billion euros on lottery tickets for El Gordo. That's 4.5 percent more than last year.
NEW