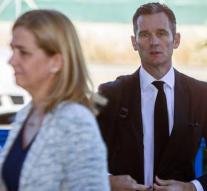 - The prosecutor wants Inaki Urdangarin and his business partner Diego Torres as soon as possible to take in custody, said Pedro Horrach Friday after the ruling of the court of Palma de Mallorca in the case Noos.

This is common when the sentence is more than six years and should minimize the risk of flight. Urdangarin, husband of Princess Cristina and brother of King Felipe, was sentenced to six years and three months in prison, Torres to 8.5 years. Both can appeal.

Iñaki's attorney Mario Pascuel Vives saw no reason for detention. 'All the crimes for which he was sentenced know a sentence of less than three years. It is only true by the sum of the penalties that the punishment over six years.' Iñaki was indeed sentenced separately on five points, including fraud, forgery, embezzlement and corruption.