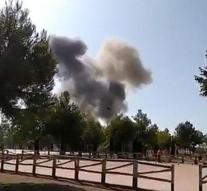 albacete - After an air show on the occasion of the national holiday in Spain, a fighter plane crashed on Thursday. The pilot was killed, the authorities reported.

The Eurofighter aircraft accidentally collapsed on the way back from a show to Los Llanos Air Force Base at Albacete, about 230 kilometers southeast of Madrid.