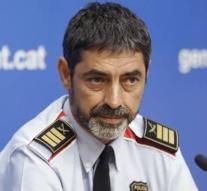 MADRID - The Spanish Supreme Court has called on the head of the Catalan police to testify about accusations of robbery. Josep Lluis Trapero may explain how the detention of high Catalan officials went on.

The officials were arrested by police on September 20 in the run-up to the forbidden referendum on independence of Catalonia. It was the Spanish police who carried out the arrests. The court wants to know how the Catalan police worked. Trapero is not the only one who can explain his role. Among others, a second high Catalan police officer has been called to appear.

The Madrid Supreme Court ruled at an earlier stage that the referendum in Catalonia was illegal and should not be held. However, the government of Catalonia continued its parliamentary consultation.