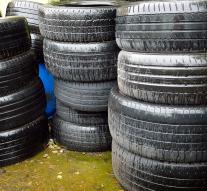 toledo - The Spanish authorities are in their stomach with a mountain tires. In a residential location north of Toledo are five million tires. 90,000 tons of rubber have been dumped since 2002 and cover an area of 117,000 square meters.

Authorities are now looking for a shredder. Shredded tires can be used in the construction of roads, making those sound deadening , reports The Guardian. Meanwhile, make the tires both a fire hazard and an environmental hazard.

According to environmentalists, the bonds in case of fire can not be extinguished with water but should be poured over the earth . The company that the tires should have process proved not up to the task.