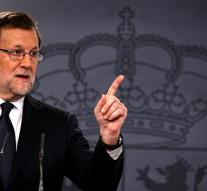 - Spain is one step closer to a minority government. Acting Prime Minister Mariano Rajoy of the conservative party PP said Tuesday the order of King to have accepted Felipe of Spain to form a new coalition.

Rajoy could so far not sufficient support in parliament to form a second government. The country should thereby be about ten months in a political deadlock. Thanks to the center-left PSOE there seems to be changing: the party decided last week not to be uncooperative if Rajoy wants to form a government.

Yet presumably Rajoy faces a difficult period. Although the PSOE does not want to block the arrival of a minority government, the party did not know just to approve all bills. For the Prime Minister it comes as no surprise: ' I am very aware of the difficulties that rule with a minority involves '' he told reporters.