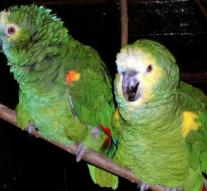 dusseldorf - A customer who was bitten by a parrot in a German pet store eventually received a damages of more than 4000 euros from the court in Düsseldorf. The 45 year old man walked in to the pet store in the fall of 2009 to buy a hamster. Suddenly he was attacked by a parrot who bore him in the right hand and arm.

He claimed 6000 euros of compensation and smart money because the aggressive bird should not fly around. The owner of the pet shop argued that the customer had grabbed and tested the parrot.

The judge ordered the victim on Tuesday. He determined that the animal salesman is liable. The pet trader must pay 500 euro of smart money and 3600 euro for lost income. The parrot's victim could not work for seven weeks.