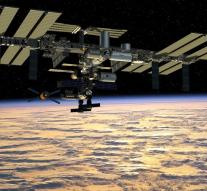 baikonur - Three crew members were on Friday returned from ISS. Their capsule landed on the snowy plains of Kazakhstan, a few hours after the door of the Space Station had been closed. Because of the weather, they are immediately taken by helicopter to the civilized world. Usually astronauts are first checked in a tent at the landing spot.

The American Kjell Lindgren, the Russian Oleg Kononenko and the Japanese Kimiya Yui had gone in July to the ISS. Kononenko was one of the companions of the Dutch astronaut André Kuipers. They were from December 2011 to July 2012 together on the ISS.

In the ISS are now two Russians and an American. Two of them have been staying there since March and they only return March deadline next year. The residents receive next week the company of a Russian, an American and a Briton.