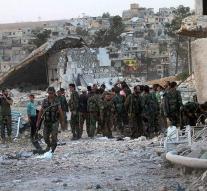 - Germany, France, Britain, Italy and the US discuss Wednesday in Berlin about the war in Syria. This confirms the German Ministry of Foreign Affairs. A spokesman said they look for ways to reduce violence and to shape a peaceful political process.

The consultation follows the US decision to break off the dialogue with Russia on a ceasefire in Syria. The White House did Monday in frustration over the bombing of the siege of the city of Aleppo.

UN chief Ban Ki-moon urged Tuesday that the US and Russia resumed their dialogue in order to stop the fighting. There should be a file in order to provide much needed assistance. Ban also expressed his concern about the appalling situation in Aleppo.

US Secretary of State John Kerry has stressed Tuesday that Washington has not given up on a cease-fire. ' We remain a cease-fire pursuit across Syria, which is a serious, sustainable and enforceable, '' Kerry said on a visit to Brussels.