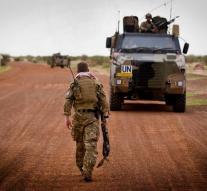 juba - The government of South Sudan still refuses additional peacekeepers to admit the United Nations. Foreign troops are welcome to help the bloodshed to end in the country, but not the UN commanded, let the government know in Juba Wednesday.

Last week Juba have agreed to a proposal by the IGAD, a grouping of East African countries, for the arrival of an African force for South Sudan. They covenant it no conditions, said the IGAD. The organization wants to myself working under the UN umbrella.

However, additional peacekeeping troops should not be added to the UN Mission in South Sudan (UNMISS), says the government. That would protect civilians insufficient. The insistence of the United States on extra peacekeepers smacks according to Information Minister Michael Makuei to imperialism.