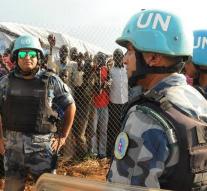 juba - Southern Sudan still allows a new force of the United Nations. The country has agreed that the four thousand blue helmets will accept and give them freedom of movement in order to help protect civilians in the capital Juba.

That the South Sudanese government Sunday declared after a meeting with diplomats from the United Nations.

Last month, President Salva Kiir did not know that he would not allow new forces and also refused to cooperate with the UN. Who threatened sanctions and an arms embargo.


In July, riots broke out in Juba between Kiir forces and supporters of his former vice president Riek Machar.