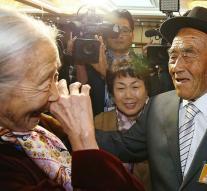 - South Koreans since the Korean War (1950-1953) living apart from family members in North Korea, which may see the same again . Four hundred South Koreans were waiting Tuesday at the North Korean resort of Mount Kumgang at the first meetings , which take place until Thursday . Reported that the South Korean news agency Yonhap .

The reunion is the first since February last year and the result of an agreement signed in August this year.

Which put an end to the tensions between the two Koreas that were running high for it again.

That was due to the explosion of a landmine at the border, mutilated two South Korean soldiers.