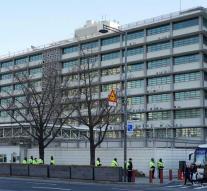 seoul - A South Korean official has attempted to apply for asylum in the United States in an unconventional way. The man rammed the gate of the American embassy in Seoul with his car, message news agency Yonhap.

Witnesses say that the man suddenly overturned the wheel and entered the main entrance of the diplomatic post. The car then stopped at the gate. The 47-year-old official did not enter the embassy and was immediately arrested. He shouted 'help me' several times as agents overpowered him.

On pictures you can see that both the gate and the car of the man suffered damage. There was also a woman in his car. She complained of pain and was transferred to the hospital. The man later declared to want asylum in the US.

According to the police, the suspect has a management position at the Ministry of Gender Equality and Families. A test showed that the official had not drunk.