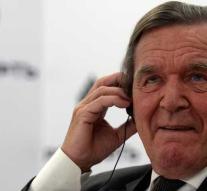 seoul - A South Korean complains the former German Chancellor Gerhard Schröder. The man holds the German responsible for the breakdown of his marriage, reports state press agency Yonhap on the basis of sources at the court.

The 74-year-old Schröder and the 26-year-old Kim So-yeon announced their engagement in January. The former spouse of the woman blames the duo for having had an affair. He claims 100 million won (more than 77,000 euros) in compensation because of the 'unbearable psychic pain' which he subsequently suffered.

The man further argues that his reputation was damaged by statements made by ex-wife Kim, an interpreter, at a press conference. She said she was divorced years ago, while the marriage was not finished until last November. The court in Seoul deals with the case.