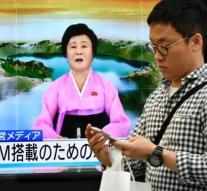 seoul - The South Korean army held a military exercise in the Japanese Sea on Monday. The power show is a response to the nuclear test of neighboring North Korea a day earlier.

According to the South Korean press office Yonhap, an attack on the North Korean nuclear weapons area was simulated at sea. During the practice rocket launches were performed and jet fighters were used.

The army reports that new military exercises are being prepared. The United States will also participate.