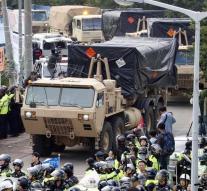 seoul - The US rocket defense system THAAD in South Korea was further expanded on Thursday. Despite protests by hundreds of inhabitants, the Americans according to South Korean media transported another four rocket launchers to a base in Seongju, about three hundred kilometers south of Seoul.

Thousands of agents had to be deployed to release the convoy that transported the necessary equipment. About four hundred residents tried to prevent the placement of the equipment. They fear that their place can become a target of a North Korean attack.

Due to clashes between protesters and agents, dozens of people became injured. The evil inhabitants eventually did not succeed in their intentions. 'The provisional placement of the THAAD system has been completed today,' according to the newspaper Korea Herald.

THAAD uses projectiles to intercept missiles. There were already two missile launchers in Seongju; there have been four more. A THAAD battery should require at least six such rocket launchers to function properly.