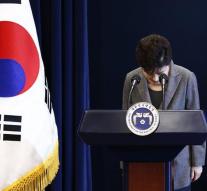 seoul - The parliament of South Korea on Friday decided that impeachment can be initiated against President Park Geun-hye. During its implementation it has no more presidential powers.

The president is involved in a corruption scandal and a majority of parliamentarians feels that it is unsustainable. The last word is up to the Constitutional Court decides whether they actually have to go. Until then, the South Korean Prime Minister shall assume the functions of the President where.

The South Korean parliament has three hundred members. The adoption of the decisive motion required a two-thirds majority. It is for the first time to disappear forced a democratic president in South Korea. According to South Korean media has Park Geun-hye immediately after the vote convened her Cabinet.

The parliament building in the capital Seoul Friday demonstrated once again angry citizens who believe that Park Geun-hye should resign. Over the past six weeks, hundreds of thousands of people each time came back in Seoul and met in other places to demonstrate against the president.