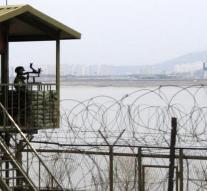 The North Korean crossed Thursday around 10. 00 pm local time the heavily guarded demilitarized zone (DMZ) between the two countries, according to Seoul. He was unarmed and is currently being questioned about how and why he crossed the border.

Each year more than a thousand North Koreans fled to the south, but most do so via China. It's very rare that someone crosses the demilitarized zone, as it is filled with land mines and barbed wire, and both sides are guarded by soldiers. The last time anyone ventured the crossing was in June 2015.