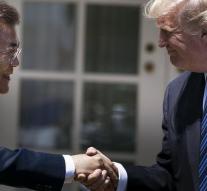 The White House announced that the president came to that decision after a telephone interview with the South Korean president, Moon Jae-in. With the permission, South Korea can purchase some billion dollars of weapons, including missiles, from his ally United States.

The decision comes about a day after North Korea's arch enemy successfully held an underground test with a suspected hydrogen bomb.