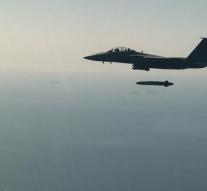 seoul - The South Korean Air Force has for the first time practiced under combat conditions with a Taurus long-range rocket. According to South Korean media, German projets can be used to meet targets in the North Korean capital Pyongyang.

A combat device fired the projectile over the west of the country. The rocket would have hit the coast 400 kilometers away. According to the Air Force, it shows that it is able to 'execute high-speed precision attacks on strategic goals. '

The exercise served in response to the North Korea's sixth nuclear test. The Taurus, which has a top speed of over 1160 kilometers per hour, can achieve every goal in the Stalinist-controlled neighbor, according to state press office Yonhap, within 15 minutes.