Home / World / South America against US intervention in Venezuela 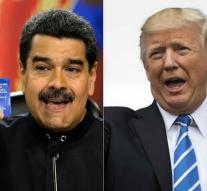 buenos aires - Important South American countries are opposed to military intervention in Venezuela. The Mercosur organization, with Brazil, Argentina, Paraguay and Uruguay as members, said Saturday that dialogue and diplomacy were 'the only acceptable means' to promote democracy in Venezuela.

The statement follows the threatening language of US President Donald Trump. He said Friday: 'Venezuela is not far away. The people suffer and die. We have many options for Venezuela including a possible military option, if necessary. '

The South American country is in a deep economic and political crisis. President Nicolás Maduro is trying to alleviate the problems by setting up a new constitutional meeting, dominated by his socialist party. The parliament, in which the opposition has the majority, has thereby further outpaced it than it already stood.

The election of the body that has to draft a new constitution is highly controversial. Even the company that supplies the voting computers to the Venezuelan government said that the result was tampered with; According to the head of the company Smartmatic, the rise has increased by a million million votes.

The fact that Mercosur's Mercosur Mercosur Mercosur Block is against American intervention does not mean to support the government in Caracas. Last week, Mercosur suspended Venezuela's membership for an indefinite period. The remaining members demand restoration of democracy and release of political prisoners.