Home / World / South Africa will remain a member of ICC 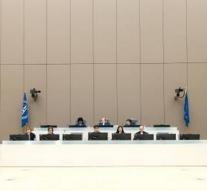 johannesburg - South Africa will remain a member of the International Criminal Court (ICC). The government complained last month about the court as 'a tribunal to try Africans' and wants to quit. However, the High Court in Pretoria ruled that the decision was unlawful because the parliament had passed the decision.

The government has Guterres Secretary-General of the United Nations of its decision notified. However, Justice Minister Masutha said that South Africa is going to try to get off the court again, this time with the consent of parliament. How long the process will take, is not yet known.

South Africa should otherwise appear on April 7 for the ICC to explain why two years ago, President al-Bashir of Sudan has not arrested when he visited the country for a summit of the African Union. Against the president was an international arrest warrant in effect for genocide and war crimes.

The International Criminal Court resides in The Hague. It was formally established in 1998 and went to work in 2002. It is in fact no UN authority. The court may rule only on member countries. Russia, the United States and China do not count for example. In Africa there is much resistance to the ICC, which issued more than a billion and only four people, all Africans, condemned.