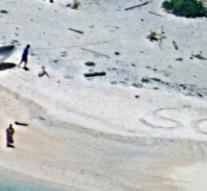 - Two on a desert island stranded ship passengers are picked up after more than a week and brought back to civilization. The pair had departed from the island of Weno in Micronesia on 17 August. A day later they had to arrive at the 300 km away island Tamatam. By engine trouble and they were halfway stabbing and washed ashore on a remote island.

After the duo was declared missing started the navy in the region a search. Eventually, they were spotted by a US plane after more than a week. As in the calibrated film scenarios, the duo wrote in big letters 'SOS' in the sand. The sea travelers had a limited supply of food and no means of communication with them. A patrol boat took the stranded couple.