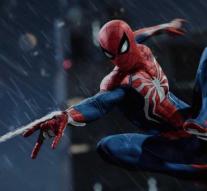 amsterdam - After a short period of absence, the superhero Spider-Man is back again. The superhero not only gains ground in various cinema films that he appears in, but also in the game area, the hero winds up our living rooms.

Players can work for years with different Spider-Man games. With so many existing games about the spider man, it is not surprising that this will become boring at some point. Yet developer Insomniac Games with its new Spider-Man game still gives a new twist to the old trusted superhero.

This is mainly due to main character Peter Parker, the alias of Spider-Man. Contrary to many games that tell the hero's origins, this new Spider-Man game takes a different tack.

' This is an older Peter Parker, he is eight years older and he is graduating. It is not about the same story of origin, although we do acknowledge it. ', Says Ryan Schneider, Chief Brand Officer at developer Insomniac Games, in an interview with XGN. NL.

'With the Spider-Man experience, we want to give you the feeling that you are an acrobatic improviser. That you fly through the air at breakneck speed and that you have a lot of choices to approach enemies. Whether it's interaction with the environment, pulling up enemies, throwing at each other, your arsenal of gadgets or quietly sneaking around. There are so many choices that make you feel like you are an absolute master in your profession. '

You certainly notice this when you play the game. Without any effort you will swing past buildings, jump from roofs and launch your Spider-Man from street lamps. Marvel's Spider-Man for PlayStation 4 will be on sale from September 7th.