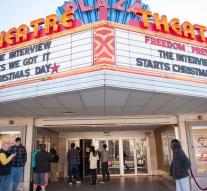 - Sony Entertainment is compensation paid to (former) employees whose personal data has been stolen during the great hack that the media company struck in November 2014. With the settlement that Sony has signed with the victims involved an amount of eight million dollars (about 7 million), reports The Hollywood Reporter.

The employees who were victims of credit fraud now get up to $ 1000 (880 euros) per person, employees whose identities were made public Up to 10 000 dollars ( 8800 euros) compensation to meet you.

Last year, Sony targeted by hackers who managed to lay their hands on emails and other business information. North Korea was accused of large-scale hack; the country would have been angry with the film made ​​by Sony The Interview, where leader Kim Jong- un is taken on the heel.