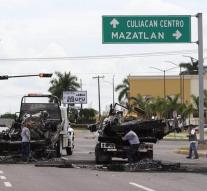 - The sons of the convicted drug lord Joaquin 'El Chapo' Guzmán probably been behind an ambush in Mexico that Friday morning (local time) to five soldiers claimed the lives and another ten wounded. Reporting that General Alfonso Duarte, the tallest soldier of the state of Sinaloa.

The attack on the military convoy took place on the outskirts of the city of Culiacan in northern Sinaloa, on Mexico's west coast. The convoy that transported the prisoner Julio Ortiz, was bombarded with grenades. Two vehicles then catch fire.

Ortiz was reportedly involved in a conflict over the control of drug plantations between Aureliano Guzman, brother of Joaquin, and Alfredo Beltran, leader of the rival Beltran Leyva cartel. The attackers managed Julio Ortiz to get alive from the convoy. It is not clear whether Ortiz an ally or rival of the gunmen.

When the ambush several armored vehicles were used. ' It was a cowardly attack because the soldiers were unable to defend, '' said Mario Lopez, governor of Sinaloa. Twitter Mexican President Enrique Peña Nieto promised to bring those responsible to justice.

The 61-year-old Guzman, formerly the ruthless boss of the Sinaloa drug cartel, in 2015 saw a chance to escape from prison in Mexico City via more than one kilometer long tunnel. In January this year he was again arrested after a huge manhunt. Since then he is under strict supervision.

The United States has asked for the drug lord extradition. Guzman's lawyers are trying to avoid.