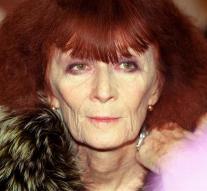 - The famous French fashion designer Sonia Rykiel is deceased at the age of 86. She suffered recent years, from Parkinson's disease.

Rykiel made exclusive clothing that was sold all over the world. They also had their own perfume line.

She opened her first shop in Paris in 1968. Include Brigitte Bardot, Catherine Deneuve and Audrey Hepburn were among its customers. In 2009 she received a high award for her work in the French fashion industry.