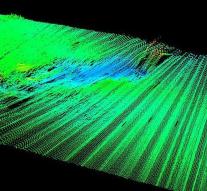 - By the Department of Defense released sonar images show that the Dutch flagship De Ruyter is really missing his final resting place. A second image shows the devastation that have wreaked ship breakers on the wreck of the Kortenaer.

On the image of the De Ruyter is only to see a gully where once was the 170 meter long ship. The demolition must have happened after 2010, when it was known as the last expedition that all warships encountered in pristine condition.

Both warships perished during the Battle of Java Sea (February 27, 1942). Last Tuesday, the Defence brought the news that on the eve of the 75th anniversary of this battle nearly all Dutch ships participating are gone. Most likely, they fell prey to ship breakers.

Wednesday arrived via British media already sonar images out of hit British ships. In this country the anger over the troubled war is great. In total, there were nearly 2200 sailors at the Battle of the Java Sea to. Including the Dutch squadron commander Karel Doorman.