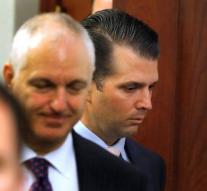 washington - The eldest son of Donald Trump answered questions about a meeting he had with a Russian advocate during his election's election campaign for five hours.

Donald Trump junior was interviewed by members of the Senate Committee on Legal Affairs. A handful of predominantly Democratic senators were added, but they should not ask questions. The younger Trump was not under oath.

Senator Richard Blumenthal, a Democrat, called the atmosphere in the room 'warmly. 'The statements made by Trump Junior made him aware that there is more to discover. Blumenthal said to expect the son of the president to be heard under oath at a public session later.

In a pre-arranged statement, the young Trump indicated that he had agreed in the conversation with Natalia Veselnitskaja, advocate, because they might have stressful information about Democratic presidential candidate Hillary Clinton. He felt that he 'should at least hear her' if she knew something about 'the suitability, character or qualifications of a presidential candidate. '

US intelligence services claim that Moscow has tried to influence the elections in favor of Trump. Several committees of Congress and a special prosecutor are investigating possible collusion between Russia and Trump's campaign team.

Trump junior reiterated that he did not collaborate with a foreign government and also did not know anyone else who would have done so. During the conversation with Veselnitskaja in June 2016, Trumps son-in-law son Jared Kushner and former campaign leader Paul Manafort were also present.