Home / World / Son of Trump and Manafort may testify 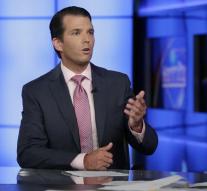 washington - Special prosecutor Robert Mueller has no objection to publicly testifying to the American Congress the eldest son of Donald Trump and the former campaign leader of the president. That's what Dianne Feinstein, the highest Democratic politician in the Senate Courts Committee, said on Tuesday.

Former FBI Director Mueller has been appointed as special prosecutor to investigate Russian interference in the US presidential election and possible collusion between Moscow and Trump camp in the run-up to the poll. It is not yet known whether and when Donald Trump Junior and Manafort appear before the commission.

Trump junior released e-mails last week, revealing that in June 2016 he wanted to speak with a Russian advocate who might have information that was harmful to Hillary Clinton, his father's Democratic opponent. From Trump's camp, son-in-law Jared Kushner and campaign manager Paul Manafort were present at the interview with Natalia Veselnitskaja and Russian-American lobbyist Rinat Akhmetshin.