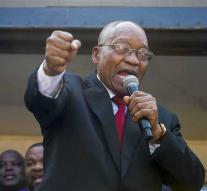 johannesburg - South African prosecutors are going to sue the son of former president Jacob Zuma for a fatal traffic accident. Duduzane Zuma crashed in 2014 with his Porsche 911 on a taxi van. As a result, a woman was killed and two people were seriously injured.

The authorities had initially decided not to prosecute Duduzane because of the crash, but later turned that decision back. This happened after a civil rights organization in October last year had indicated that they would like to sue the man himself if necessary.

Prosecutors had given the son of the former president until the end of March to explain why they should refrain from persecution. However, Duduzane did not come up with exculpatory information, said a spokesman for the NPA, the National Public Prosecution Service. That is why prosecutors now proceed to prosecution.

Duduzane is not the only one in his family who has to deal with justice. Former president Jacob Zuma himself is being prosecuted for suspected corruption.