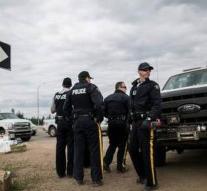 edmonton - A man suspected of striking a policeman in the Canadian city of Edmonton and pedestrians is a Somali refugee. The Canadian police reported Sunday that the man is being charged with attempted murder.

Two years ago, the police conducted an extensive investigation into the man, because he would carry out an 'extremist ideology'. Based on the research, he was not seen as a threat to society. The police did not want to disclose the 30-year-old's identity, but according to Canadian media, the suspect Abdulahi Hasan Sharif is called.