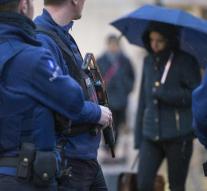 brussels - Soldiers in Brussels fired a man on Friday night to attack them. According to Belgian media, he had approached military personnel with a knife. Two soldiers would be light-wounded.

At 20.00 the shooting took place on the Émile Jacquemain Avenue. The man with the knife would have died, according to various Belgian media.

The police are massively on the spot. The neighborhood has been shut down.