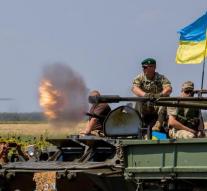 - Ukrainian President Poroshenko has brought all military units in the vicinity of the Crimea in the highest readiness. He did so after Russia accused of invasion of the peninsula.

Since Wednesday, military exercises are also held in the south of Ukraine.

According to Russia, Ukraine last weekend attempted to invade the Crimea with elite troops. Which would be blocked by the Russian secret service FSB. A Russian soldier and an FSB employee would thereby have died. Ukraine goes against the story.


The Americans could find no evidence for the accusations.