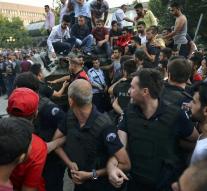 - A group of soldiers who surrendered after the attempted coup is Saturday morning at one of the bridges over the Bosporus attacked by sympathizers of the Turkish President Recep Tayyip Erdogan. They could eventually be removed by the police, but were arrested immediately.

Erdogan had his supporters in the hours of the coup attempt called to the streets to protest against the coup.

According to the Ministry of Justice in Ankara have so far 754 soldiers arrested who are suspected to be involved in the coup attempt it.


The headquarters of the armed forces is now back in the hands of soldiers loyal to the current government. According to a government spokesman, there are small pockets of resistance. There are also helicopters owned by the rebel soldiers. Being knocked down, he said.