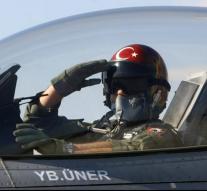 - The Turkish authorities have arrested forty soldiers of the Konya air base in connection with their possible involvement in the failed coup in July. That, Turkish media reported Thursday.

The soldiers were supporters of the cleric Fethullah Gulen, in accordance with the Ankara government masterminded the coup in July. The authorities have arrested 32 000 people and about 100 000 soldiers, policemen, magistrates, teachers and civil servants suspended because they are connected to the network of Gulen.