Home / World / Solar Impulse is around the world 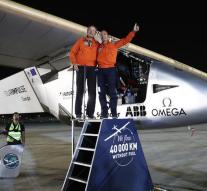 - After succeeded almost eighteen months. The solar airplane Solar Impulse 2 is Monday night arrived in Abu Dhabi, capital of the United Arab Emirates. On March 9, 2015 the unit began from that spot his trip around the world, powered only by solar energy.

A little after 04. 00 (02. 00 pm Dutch time) put pilot Bertrand Piccard, Solar Impulse to the ground. He was in the night from Saturday to Sunday at its final stage started from Cairo.

It is the first time that an airplane makes a world without using fossil fuels. Solar Impulse is a project of the Swiss Piccard and co-adventurer Andre Borschberg that 1600 kilo plane ruled with a length of 22 meters. It can reach a height of 8500 meters.