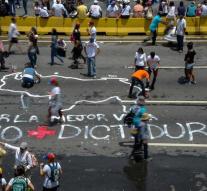 caracas - The death toll in Venezuela as a result of rumorous demonstrations against the government has risen to at least 42. That states the prosecutor, who announced another three deaths on Tuesday.

A 33-year-old taxi driver was hit in the western border state of Tachira by a bullet in his chest and died. The suspect is a police officer arrested for the offense. In the central state of Barinas, Tuesday died a 17-year-old, who was shot a day earlier by a protest. Also in San Antonio, someone whose age and identity was unaware came to die during protests.

The Venezuelan economy is about to collapse. There have been demonstrations for weeks against the Socialist government. In addition, hundreds of injured people have died in addition to killing.