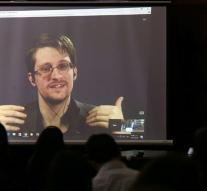 - Now Donald Trump has been chosen as the new president of the United States Americans must be aware that they will increasingly be overheard. Whistleblower Edward Snowden previously warned Monday in a speech at the University of Buenos Aires via video link.

' We start the open government in exchange for pure authoritarianism, a government that is not based on the principle of the consent of people who understand what the government engages in activities, but is based on personalities, on a confident assertions trust in the hope that the government does the right thing, 'said Snowden.

The US government promised in 2013, after the revelations about the spying practices of the US by Snowden, that there would be no question of any espionage. Snowden wonders aloud whether that policy still will be continued under a new government ' which pursues very different values. '