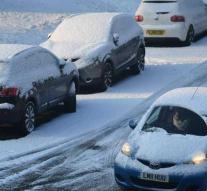 london/glasgow - Snow and ice have partially curbed traffic in the United Kingdom on Wednesday. Hundreds of trains fell out because of the winter weather. Heavy snowfall made roads partly impassable. Especially Scotland and the East of England are affected.

Hundreds of schools remained closed. The airports of Glasgow and Newcastle have temporarily interrupted air traffic in order to clear snow from their runways. More than a hundred flights at Heathrow have been canceled. Also the express train to London Heathrow Airport did not drive.